Abbot Celestine joined Fort Augustus Abbey School as a schoolboy in 1927. In 1929 he joined the monastery.

Abbot Celestine was professed in 1930. He was ordained a sub deacon on 18 March 1934 and ordained, together with Fr Denys Rutledge, on 2 August 1936 by Bishop George Bennet of Aberdeen (OB). Brs Edmund Carruth and Anselm Richardson were ordained to the diaconate at the same time.

Taught Mathematics before moving to the Priory School, Edinburgh in 1937 to teach mathematics. In 1938 he returned to Fort Augustus.

He became the first housemaster of Vaughan in 1941 after the introduction of the house system. During the war, he taught mathematics and science. He was a member of the monastic council from 1951 and a delegate to the General Chapter in 1953 and 1957.

Elected 6th Abbot of Fort Augustus Abbey on Wednesday 30 December 1959 taking over from Abbot Oswald Eaves after many rounds of balloting before a clear two thirds majority on the last simple majority vote.

In December 1967, Abbot Celestine was replaced by Abbot Nicholas Holman, a monk from Downside Abbey. Abbot Celestine left the Abbey to take up position of chaplain to the Carmelite convent at Quidenham, Norfolk. 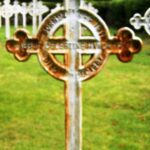