Abbot Oswald Hunter-Blair was titular abbot of Abbingdon, then Dunfermline

He supplied much of the funds for first buildings at Fort Augustus and helped found St Bede’s College, Manchester.

He was the first master of St Benet’s Hall, Univesity of Oxford 1898

St Benet’s Hall has been in existence as a Hall of the University of Oxford for well over a hundred years.  It was founded in 1897 as a place for the monks of Ampleforth Abbey and other monasteries to live while they read for Oxford degrees. Twenty years later it became a Permanent Private Hall of the University.  Today St Benet’s Hall matriculates undergraduates and graduate students of all faiths and none into the University to study a range of subjects across the Humanities and Social Sciences.

St Benet’s Hall was not known by that name until 1918. Its origin lies in an arrangement made by the University for any Master of Arts to maintain a private hall from which they could present candidates for degrees. This Benedictine Hall owes its foundation mainly to the vision and energy of Fr Anselm Burge, Prior of Ampleforth.

Crucial however to the foundation was Fr Oswald Hunter-Blair, not a monk of Ampleforth at all. He went to Magdalen College, where it is said that he had rooms on the same staircase as Oscar Wilde. He heard both Manning and Newman preach at the new Catholic church of St Aloysius, and was introduced to Trollope. While on a first trip to Rome, not yet eighteen, he worked as a stretcher-bearer in the Italian siege of Rome in 1870, although the Papal army in fact had no stretchers. He became a Catholic while at Oxford, and in 1897 Fr Anselm Burge asked Oswald Hunter-Blair to become Master of what became known as Hunter-Blair Hall.  On Hunter-Blair’s retirement in 1908, Fr Anselm Park became Master and the Hall became Parker’s Hall, before in 1918 the Hall became a Permanent Private Hall, with the official title Aula Sancti Benedicti, St Benet’s Hall. 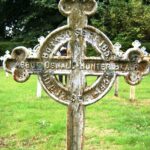 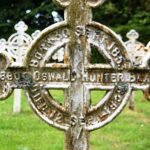