On 6 November Fr Prior officiated at the burial in the monastic cemetery of Andrew MacLaren who had stayed in the Abbey as a boy. At the age of 13 he had wanted to join the Community. From 1922-45 he was MP for Burslem, at first in the Labour Party. He later resigned from it. In London he founded the London School of Economic Science. 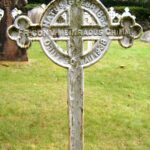