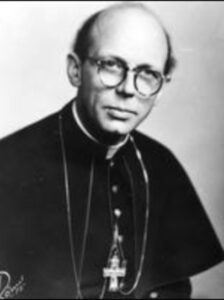 Baptised Knut Nelson, he was born and educated in Denmark. 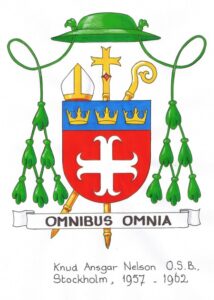 At Fort Augustus, he held the posts of Junior Master, Master of Studies

Father Ansgar went to USA for study in 1925 and became a Catholic and joined Portsmouth. He studied philosophy, Hebrew, German.

He was chaplain to German POWs in Newport, USA.

On 8 September 1947 he was consecrated Coadjutor Bishop to Vicar Apostolic Sweden; succeeded 1957, as second Bishop in Stockholm resigning in 1962 aged 55 on health grounds and became chaplain to nuns in Switzerland before finally retiring to Portsmouth in 1967. 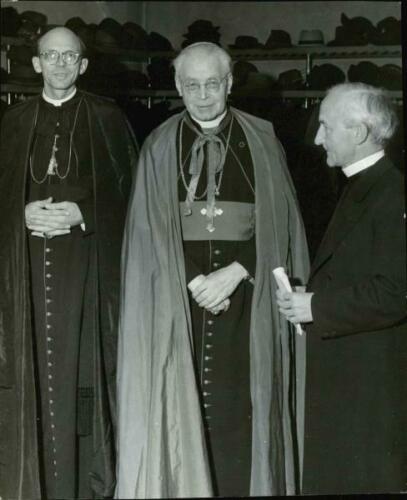 The following is taken from The St Ansgar Bulletin

The Most Reverend Knut Ansgar Nelson, O.S.B., M.A., D.D. was born in Frederiksvaerk, Denmark, on October 1, 1906, the son of a ship captain. He died in Newport Hospital on March 31, 1990, fortified by the Sacraments of the Church and the prayers of his monastic brethren.

The young Knut aspired to be an artist, abandoning the idea only when some time and effort had convinced him that he lacked the talent. Art remained a life-long interest of his. At the age of 19 he came to the United States and worked for his uncle, a florist, in Wellesley, Mass. He also knew a good deal about tree husbandry and practiced it upon the Abbey’s Scots pines behind the present monastery.

Knut became a Roman Catholic in 1927. It is inter­esting to speculate on the reasons for his conversion. Certainly the artistic and historical dimensions of Ca­tholicism would have attracted him; certainly the linkage to ancient languages was no barrier to a young man with the gift of tongues. But what must have drawn him more than any other factor save the very Grace of God itself was the rational philosophical tradition of the Church.

A chance contact with Fr. Hugh Diman, the founder of Portsmouth Priory School, was perhaps the beginning of his monastic vocation. Portsmouth and St. Anselm’s (Washington, D.C.) were at this time dependent priories of Fort Augustus Abbey in Scotland. It was at Fort Augustus, then, that Knut Nelson received the Bene­dictine habit on May 29, 1931, taking as his patron St. Ansgar, the ninth-century Apostle of Scandinavia.

The Fort was unique among the abbeys of the English Benedictine Congregation in the links it kept with the German Beuronese Congregation, a legacy of the turbu­lent times when Fort Augustus withdrew from the E.B.C. and considered affiliating with Beuron. When Bro. Ansgar, now a Junior in simple vows, was ready to begin his ecclesiastical studies his superiors sent him to the Abbey of Maria Laach, near Koblenz.

It was a momentous time. The famed Abbot IIdephonse Herwegen was reigning at Maria Laach, which had become a center for liturgical and monastic studies.in Germany. Ansgar’s Junior Master was Damasus Win­zen, later founder of Mt. Saviour (Elmira, N.Y.) The National Socialist Party was coming to power, to the initial satisfaction of Abbot Herwegen and of many German Catholics. Ansgar studied, learned-and watched.

Priest
Ansgar was ordained priest on May 22, 1937, ten years after his entry into the Church. Back at Portsmouth, he taught Classics in the School while taking an M.A. in Classics at Brown. He began his study of Hebrew, first under Erich A. O’D. Taylor and later under Rabbi Wil­liam Braude at Brown. The Rabbi. and he became life­long friends.

Ansgar became Housemaster of the Red and Master, successively, of Postulants and Juniors in the monastery. He had huge hands and the strength to go with them; there are stories of his lifting some unfortunate offender at arm’s length twelve inches above the floor and shaking him violently.

During World War 11, Ansgar acted as chaplain to Ger­man prisoners confined to an island in Narragansett Bay.

In 1946 Ansgar went back to Denmark to see his family. Things were chaotic at this time, and he had trouble getting back to the United States. While stranded in Europe, he undertook the organization of war relief efforts, while Dom Andrew Jenks substituted for him (temporarily, as was thought) in the Red.

Bishop
St. Ansgar’ s Scandinavian-American League was, and is, an important source of support to the mission­aries serving Catholics in Scandinavia. The chaplain at this time was the Rev. John LaFarge, S.J., the son of a Newport artist. It may have been his initiative that prompted the Holy See to name Ansgar Coadjutor with Right of Succession to Bishop Muller, the Vicar· Apostolic (later residential Bishop) of Stockholm, in 1947. The Consecration of the new Bishop took place in Provi­dence Cathedral on September 8, 1947. Archbishop Cicognani, the Apostolic Delegate, presided, assisted by Bishop Keough of Providence and Bishop Theodore Ansgar Suhr, O.S.B., of Copenhagen. Archbishop Cushing of Boston was the preacher.

It is said that naming a bishop’s successor guarantees a new lease of life for the bishop. Bishop Ansgar had ten very difficult years under an aging Ordinary who at first referred to him as “the putative Bishop” (his documents of consecration were packed in a trunk that took its time arriving). Propaganda, in Rome, hesitated to ask Pope Pius XII to remove Bishop Muller, since the Pope (then Nuncio in Germany) had consecrated him Bishop.

There were cultural and linguistic adjustments to make. Effie (Euphemia Charlton) Fortune, art teacher at the Priory, dropped in to visit Bishop Ansgar. He took her out to dinner in a nice restaurant. The menu featured Gos. Assuming this was goose, the Bishop ordered it. It turned out to be white fish in a yellow sauce. The embarrass­ment was not alleviated when the waiter managed to spill the yellow sauce onto Effie’s suede gloves, quite ruining them.

Ordinary
Bishop Ansgar, on succeeding as Ordinary, had his work cut out for him. There are not many Swedish Catholics. Most of his faithfuI and most of their priests were foreigners. The Diocese was immense, some of it almost inaccessible in winter. Money was scarce. Half the priests were Religious, which added one more layer of difficulty to establishing consistent diocesan policy.

The laws were hostile. The King’s permission was needed for the foundation of religious houses. Some of the diocesan funds were invested in apartment build­ings, where the landlord had almost no rights at all in dealing with tenants.

Bishop Ansgar made friends with the Chief Rabbi of Stockholm. He had contact as well with a number of Lutheran clergy, some of whom later came to visit him in Switzerland. Through Bishop Ansgar, the Holy See quietly supported an exiled Orthodox Bishop from the Baltic countries.

Bishop Ansgar tried to rationalize the finances by selling off the apartment buildings and employing a lay treasurer (an unusual step at this time) to manage diocesan affairs.

One morning the police turned up at his door. The lay treasurer had embezzled diocesan funds and there was no way of getting them back. Whether because of this shock or not, Ansgar became very ill with what was diagnosed at the time as cardiac disease. But he pulled himself together somehow and went out to raise funds for his Diocese, putting himself, as he later remarked, into a position of obligation towards the donors that would have severely limited his freedom of action in the future. Then he resigned his See and retired to a convent in Ticino (Switzerland).

His pension as retired Bishop was $1,000.00 per year, payable in two installments of $500.00 each. Each installment had to be petitioned by a letter certifying the recipient’s need.

Home Again
Bishop Ansgar returned to Portsmouth in 1967. Ex­cept for two years spent in a parish in South Dakota­the parish had been served by his old friend, the Bishop of Iceland, until the latter’s death – he remained here for the rest of his life. In the School, he taught his be­loved philosophers, pre-Socratic and Platonic, also some courses in History.

He resumed his Hebrew and Aramaic studies with Rabbi Braude, continuing them until around 1980, when the bus trip to Providence became too tiring.

The Bishop’s last years were solitary. He read ex­tensively, brushing up on his Russian and on goodness knows how many other fields of study. There were visitors. People who remembered him with affection turned up from Scandinavia to renew old acquaintance.

What probably will not be published before Judge­ment Day is the long list of those who sought him out as spiritual father, or simply as a resident bastion of learning and civility. Perhaps this was his greatest apos­tolate. What is certainly true is that we are, nos qui vtvimus, incalculably in his debt.

Crippled by osteoporosis and lung disease, he was cheerful and fully alert when he went to hospital for the last time. He died peacefully in his sleep ….. 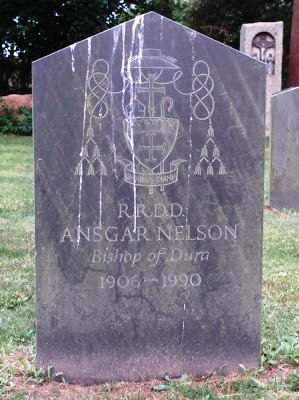