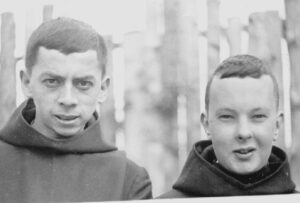 was clothed in 1938 aged 20. He was very short in stature and was a very popular monk with the boys. The photo shows him (on the right) with brother Adrian with whom he helped with the poultry.

He was a person who, once seen, was always remembered. Perhaps his smallness of stature made him approachable, but to a greater extent it was his friendliness, his playful spirit, his sincerity, his loyalty. He liked to meet people. 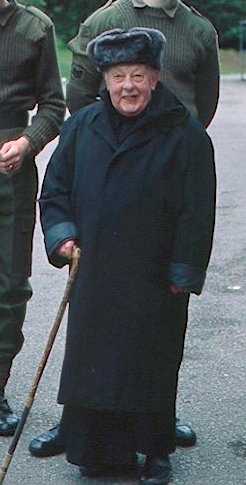 When he raked leaves in the avenue it was more to welcome visitors and passers-by than to tidy the grounds or build a compost heap. When he collected the eggs or fed the chickens for Br Adrian, he feared the cockerels which used to chase him; his rapport was with people.

When he worked as Refectorian it was characteristic that a burdensome bulk milk jug was found to conceal only a cup of tea. It is likely that his guided tours for visitors round the remains of the old Fort, the Catacombs Chapel and the Cloister gave more information about his personality than about history; the tourists learned to love him and consequently to think well of monks.

Latterly, his health caused him to fall asleep often. When he was once so affected, during a tour, his group wondered with concern whether to wake him, or wait till he awoke, or tiptoe silently away! They did not feel let down or antagonistic. His gift was with people. His many correspondents, his friends from school and monasteries and lengthy travels in Britain and Europe, the bus drivers and couriers, the countless visitors to Fort Augustus would all miss him.

In 1977, Brother David had been seriously ill after complications following an operation but recovered and made good progress. 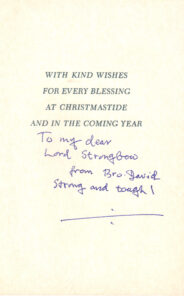 Right photo taken in 1985 with some CCF boys

Left photo – a Christmas card to the webmaster 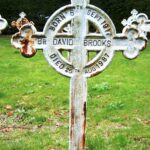 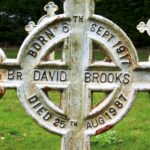