Brother Dominic was born in London in 1887 but completed his schooling at St Cuthbert’s, Slateford. At the age of fifteen, he came to Fort Augustus to be a laybrother.

As his father, Georgius (1855-1917),  was a chef at a hotel in Aberdeen, Brother Dominic was put into the monastic kitchen. He was joined by his father who worked in the Abbey kitchen until his death in 1917 (he was buried in the monk’s cemetery).

For many years Brother Dominic was in charge of the kitchen and also spent considerable periods as sacristan. He was often thurifer at major choir functions. He kept a diary in which he noted the precise details of all the major functions at the Abbey since the turn of the century. Towards the end of his life, he developed weakness of the heart and a form of dropsy.

On 3 September, Brother Dominic Fasseau died and was buried beside his father in the Monastery graveyard. 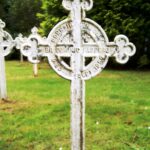 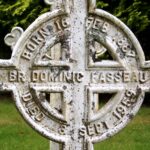