Unusually, there is a 5 year gap between clothing and profession with no reason known.

Born in Lanarkshire in 1883, he left home at the age of fifteen to enter the religious life with the Vincentians at Armagh but, after a short time, came to Fort Augustus in 1898.

There he was put under Brother Henry to learn carpentry. He continued as a carpenter and joiner for the rest of his life. He was also a great hill walker and a keen fisherman. In his old age he would spend his holidays at St James’, Buckie, setting off early in the morning with his rod and bicycle. In his later years he devoted much of his life to prayer. On 5 June Brother Gerard O’Brien died suddenly, having just finished saying the Rosary and having received the Sacrament of the Sick two days before. 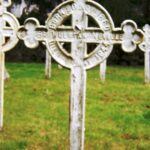