Brother Joseph was a keen fisherman. During the war when food supplies were restricted, members of the Community did what they could to supplement food supplies. Brother Joseph scrounged sugar to keep his hives of bees alive; along with other monks, he spent cold and weary hours out after salmon on Loch Ness from 15 January onwards in snow, sleet and rain.

A monk with great mechanical skills, Brother Joseph maintained the school van and also gave talks on the working of a Merlin engine which had been provided to the Air Training Corps at the school. school.

When Carlekemp was opened, Brother Joseph was sent to help prepare the building for its new use. His mechanical skills were instrumental in managing to maintain the Abbey printing press and, on his death in 1974, the press finally ceased to function.

Just after celebrating his Golden Jubilee of monastic life he died suddenly on 28 May while on holiday in Bedford.

Brother Joseph was a ‘jack of all trades’ – carpenter, baker, mechanic, chauffeur and worked in the printing Press. He was a lynch-pin among the Brothers and very important for their morale. His body was brought back to the Abbey for burial. The School supplied readers and pall-bearers for the funeral. 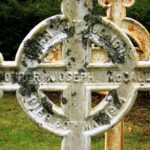