Brother Malachy’s tragic death at the age of 43 was reported in the Corbie and has been reproduced below from  Mike Turnbull’s book Abbey Boys;

February 1956 will be long remembered for the tragic disappearance of Brother Malachy Hanson who went for a walk on the afternoon of Monday 13 February and never came back. The Corbie reported:

He was last seen by Campbell and Airs near the Tarff Bridge, and the banks of the Tarff were the first place to be searched, notably on the following Wednesday, the 15th, by the whole School above the Second Form. We received every possible help from the police, who directed us on this and most other searches … Volunteers from the Village helped in Sunday searches, and in the first few days we had the help of the Gordonstoun and Altyre mountain rescue squads, with their blood-hounds and walkie-talkies … Amnesia being out of the question, it is feared that Brother Malachy, who was very short-sighted, may have lost his spectacles and fallen, perhaps into the river …

A Requiem Pontifical High Mass was held on 22 February attended by the whole School and many local people.

The most poignant event of 1957 was the finding of Brother Malachy Hanson’s body on 10 July, some seventeen months after his disappearance:

The remains were in a ditch near the path, almost at the top of Corrieyarrack Pass, ten miles from Fort Augustus. His spectacles were found not very far away. Evidently, Bro. Malachy was surprised by the sudden blizzard which followed that sunny afternoon, lost his glasses and wandered off the path, and so died of exposure.

On the day his body was found, his brother, Fr Frederick Hanson, “Father Fred”, by a happy coincidence, had arrived in Britain after seven years’ missionary service in the Far East as a Columban Missionary and he was able to sing the Requiem Mass at his funeral three days later. 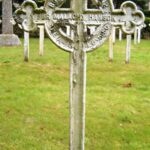 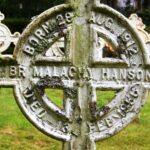