Brother Michael has two sisters who became nuns and a brother who became a priest (Glasgow). He worked as a slater and plasterer was served in the fire service in war (esp Clydebank blitz 1940-41) and latterly as a joiner at FA. He was the last of FA laybrothers.

It was Br Michael who had cast the concrete steps in the monastery garden by which the highest floods were measured – up to the fifth step in 1989 but only up to the second step in 1990. 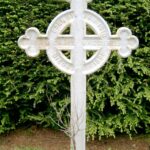 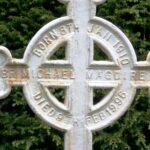