Brother Paschal was born in Clydebank and worked in John Brown’s Shipyard before joining the Royal Navy in the First World War. He came to Fort Augustus and made his profession in 1932. He worked at many domestic chores in the Abbey. In 1945, he was sent, with some fellow monks (Fr Oswald, Fr Maurus, Fr Gregory and Miss O’Donnell. Br Joseph, Br Pascal) and Mrs McCawley, Mrs Tyrell and Miss Moyra McKay to the new site (Carlekemp) to prepare the building for its opening as the new prep school) .

He fell and broke his thigh in 1985. His last years, when he had to use crutches and also became very deaf, were an inspiration to the Community by his cheerful and steadfast attendance at all monastic duties. He received special therapy at Strathpeffer for the hip which he fractured the previous year.

Br Pascal McLaughlin died suddenly in the forenoon of Friday, 29 September in his ninety-second year. 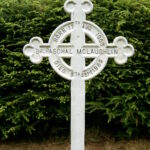 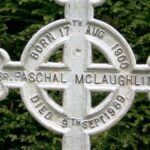