In the middle of January 1972, Br Patrick Cullen died suddenly and unexpectedly. He first came to Fort Augustus through Abbot McDonald’s Glasgow Fair retreats – at that time he was working in the mines near Hamilton. Although he suffered from asthma for most of his life, he had once hoped to become a missionary priest like his brother. He was professed in 1928, working in the Hospice, the Printing Office, the Kitchen and, latterly, the Sacristy. 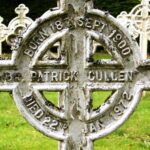