On 28 February Br Paul Scott died at Fort Augustus. Born in Chatham in 1889, he first studied farming in Ireland. In 1912 he joined the Marines. He was shell-shocked at Gallipoli in 1918 and invalided out of the Services.

He came to the Abbey in 1919, but continued to suffer the after-effects of shell-shock. He became a lay-brother oblate. For almost 40 years Br Paul was a familiar sight as he chopped sticks or carried buckets or cleaned shoes. He was a deeply spiritual man who spent hours each day in prayer and in work. 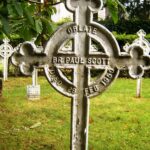