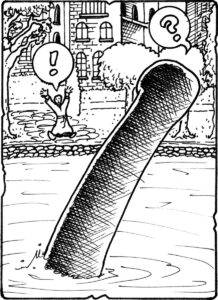 On 26 May 1934 Brother Richard Horan was working in the boathouse of the abbey on the shores of Loch Ness when he heard a noise in the water. He turned and saw
he was being watched by a large creature with a long graceful neck and a white stripe down its front. Other monks in the abbey also reported seeing the monster.

Brother Richard was not buried in the monk’s cemetery