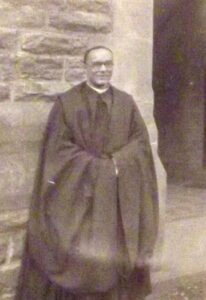 Father Aelred first tried the Augustinians of the Assumption in Belgium.

Fr Aelred worked in hospitals during the Great War. When the School reopened in January 1924 Fr Aelred was on the School staff.  He taught French and Music and was an expert on voice production.

Obituary from the Ampleforth Journal

FR AELRED WHITE, of Fort Augustus Abbey, who died on 9th November 1954, has a large claim on our prayers, for by the generosity of his Superiors he was allowed to help in our parishes. For most of the year 1930 he was at Merthyr Tydfil, and then for sixteen years at St Alban’s, Warrington. He was a man of many gifts and immense zeal. He was particularly successful in attracting and instructing converts. His own history may have contributed to this success, for he had been brought up on Evangelical principles and passed thence to High Anglicanism before being received into the Church. He suffered much from general ill health and particularly from weak eyesight, but was brave in the way he faced his impediments. May he rest in peace.