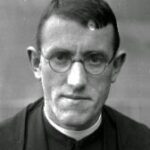 (from Abbey Boys by Mike Turnbull) 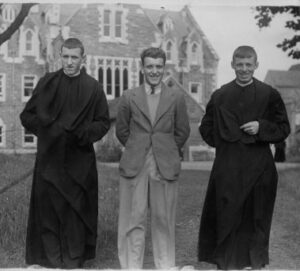 Fr Aloysius entered the Abbey in 1929 and was professed the following year before being sent to Germany to study. On 1 August 1937, Brs Alban Boultwood (later Abbot Alban Boutlwood – the H Boultwood mentioned above) and Aloysius Carruth received the sub-diaconate.

He was sent to St Andrews Priory, the prep school in Edinburgh with Frs Gregory, Alban, and Joseph.  When he returned to the Abbey, he taught Latin in school and even appeared in small orchestras playing the double bass.  With Frs Gregory and his brother Edmund, he coached the boys’ cricket teams (all monks being excellent cricket players themselves whilst at school) 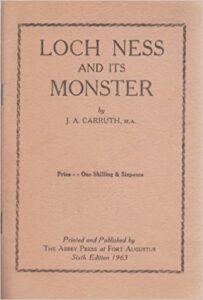 He also wrote a pamphlet on the Loch Ness Monster, published and printed by the Abbey Press which had several editions.

Fr Aloysius’ sister owned Carruths Grotto in Glasgow and Fr Aloysius ran the Abbey Shop with many items sourced from the Grotto.

In 1974, Fr Aloysius left the Abbey and travelled to Zimbabwe to join the Regina Coeli mission in the Diocese of Umtali which had been set up in 1955. He taught for a few years in the secondary school.  But in 1977, the freedom fighters who were involved in the Rhodesian civil war arrived at the mission. Fr Aloysius left to seek refuge in Umtali (see https://www.yumpu.com/en/document/read/8295469/the-diocese-of-mutare-the-carmelites-in-zimbabwe-the-irish-)

There is reference to Fr Aloysius being in Australia in 1980

Dom J.A.Carruth OSB had given me a hard copy of this “Report of the Royal Commission of Inquiry into the Condition of Crofters in the Highlands and Islands” when he was in Australia about 1980, ….

On returning to the UK, Fr Aloysius went to Barra as a parish priest and then at some point went to London to the Sisters of the poor.

Fr Aloysius died at Nazareth House on 17 November 2004 and he left his body to science – hence he has no grave.

Father Aloysius is not buried in the monk’s cemetery