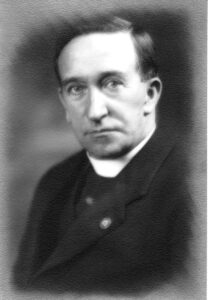 Son of Duncan and Margaret (née McDonald) McDonnell from Dalcataig.
On 22 November 1960, Fr Andrew MacDonell died at the Bon Secours Hospital, Glasgow, at the age of 90. Born in Invermoriston, he spent his boyhood at Kintail, before being accepted as an alumnus by Prior Jerome Vaughan. He was sent to St Joseph’s, Dumfries before entering the School at Fort Augustus in 1887. He was ordained in August 1896.

The first five years of his priesthood were spent in pastoral work in Fort Augustus parish. During this period he formed a pipe band, stimulated Shinty teams to compete for an annual cup, organised the Glen Mor Gathering, and founded St Joseph’s Hospital for orphans. His greatest achievement was to find and support a nursing post for the district. Two years later he set off to Vancouver Island, Canada with five girls from the Hospital and 18 others from England, hoping to find homes or positions for them.

In 1915 Fr Andrew enlisted as a chaplain and was sent to France, where he served with the Canadian Seaforths. During the battle of Vimy Ridge he worked with a field ambulance. While a chaplain he founded the Holy Name Society, to suppress the use of bad language by the troops and the taking of God’s name in vain. Almost all the most senior Canadian officers of all denominations and thousands of the men signed the Society pledge. For his services as a chaplain he was awarded the Military Cross.

After the war he returned to Canada where, for almost 20 years, he helped to take settlers from Britain to various parts of Canada. He was managing director of the Scottish Immigrant Aid Society. His initial plan to confine his recruitment activity to the transfer of war orphans from the Highlands was soon dropped in favour of a more ambitious programme to bring Highland veterans and their families to Ontario under the British and Canadian governments’ collaborative soldier settlement scheme. In 1922 he extended his horizons even further when he was able to tap into a bigger government funding pot allocated to promote general land settlement and training schemes in the dominions.

On 15th April 1923, nearly three-hundred emigrants embarked at Lochboisdale, South Uist, on the Canadian Pacific liner, the Marloch bound for Red Deer, Alberta, just six days before the departure of her more famous sister ship, the Metagama, from Stornoway.

His most lasting success was the Clandonald Settlement in Alberta. Perhaps the most publicised episode was the emigration of 300 Catholics from the Hebrides in 1924, over which there is still controversy. For his work in Canada he was awarded the MBE in 1937. He returned to Fort Augustus in 1956 before the decline in his health and memory made his transfer to St Raphael’s, Edinburgh and the Bon Secours Hospital, Glasgow necessary.
Taken from http://calumimaclean.blogspot.com/2017/06/father-andrew-macdonell-mbe-mc-osb.html and Mike Turnbull’s book Abbey Boys

The Univerity of British Columbia has a digital collection of Father Andrew’s correspondence and personal documents.,

The funeral of Rev. Father Andrew Macdonell, O.S.B., whose death, at the age of 90 years, in Glasgow last week, is mourned by many old friends up and down the Great Glen, took place on Friday from the Abbey Church, Fort Augustus, to the Abbey Cemetery. Before the funeral, the Abbot of Fort Augustus, the Right Rev. Celestine Haworth, O.S.B., officiated at the Solemn Requiem Mass in the church, and also at the interment. Father Andrew was a native of Invergarry, and was educated at the Abbey School. He was ordained at Fort Augustus in 1896, and some years later as appointed parish priest of Fort Augustus, Glengarry and Glenmoriston.

A born oganiser, Father Andrew had a tireless energy, which soon found an outlet in various directions that, at the core, had one single purpose — the welfare of the people and community. Creed never entered into it. Among the many things he accomplished in his ten years as parish priest were the following: ― the revival of the native game of shinty; the securing for Fort Augustus of its first (Queen’s) district nurse — “a great blessing in itself,” — as not a few ailing old people put it —; the founding of the Gleann Mor Gathering and Highland Games (now, alas! a thing for the past); and the formation of the Fort Augustus Pipe Band, which, also died many years ago.

In 1912 he went to Canada to organise the settlement in Alberta of many emigrants from the Highlands and Islands, but in 1914, on the outbreak of the First World War, he immediately enlisted as a padre with the Canadian Highlanders, and served in France until 1918. His courage under fire, when comforting the wounded, earned him the Military Cross, and for his great work for the emigrants after the war, he was made a Member of the British Empire. He was a classical scholar as well as a Gaelic scholar, and reference to these cultural attainments were made by the writer’s late father when he spoke at a farewell gathering held on the eve of his departure for Canada, when Father Andrew was presented with a purse of sovereigns and an illuminated address. The function was held in the Lovat Arms Hotel on July 22, 1912, and the presentation was made by the late Captain John Macdonald, of the R.M.S. “Glengarry,” remembered throughout the Great Glen and in Inverness.

As far as Father Andrew’s old friends in Fort Augustus, Glengarry and Glenmoriston are concerned, this small tribute to him might fittingly end in the words spoken by the writer’s father on that night in June, 1912, when he bade him farewell: — “Time and tide might now divide us, but neither will efface his memory form the hearts of those he leaves behind.” To this might well be added the native Gaelic-speakers’ tribute: — “Caraid nan Gaidheal.” 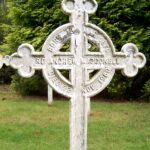 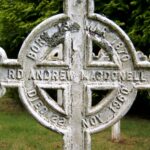