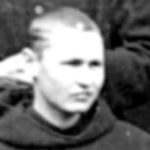 Born to Sir Frederick and Philomena (née De Lisle) and baptised Joseph Weld. His sister Scholastica (and later his mother – Lady Weld who nine years later entered the Priory as an Oblate (and was professed on her death bed – EVENTS LEADING TO THE FOUNDATION OF ST SCHOLASTICA’S PRIORY AT FORT AUGUSTUS (KILCUMEIN) IN INVERNESS-SHIRE, SCOTLAND. By MOIRA M. BUTLER ) were members of Kilcumein (later holme Eden)

Never a member of the English Benedictine Community

OBITUARY FROM THE GLASGOW OBSERVER

We regret to announce the death of Rev. Basil Weld, O.S.B., of Fort Augustus

Father Basil was a frequent contributor to these columns, and we have to acknowledge our indebtedness for the many articles and reviews, often composed in ill-health. Father Basil Weld was born at Perth, Western Australia on 10th February, 1874. His father, the second son of Mr. Humphrey Weld of Chideock Manor, Dorset, succeeded to that estate. In 1859, he married Philomena, eldest daughter of the late Mr. Ambrose Philippe de Lisle of Garendon Park, Leicestershire. Of this marriage, there were thirteen children, of whom Father Basil Weld was the tenth. His early years were spent in the colonies from 1874 to 1880 in Tasmania, and from then till 1884, in the Straits Settlements where his father was Governor. After some years at Stonyhurst, he went with his father on a pilgrimage to the Holy Land, and it was during this journey that the thought of entering religion first occurred to him. In November, 1891, he was admitted as a Postulant at St. Benedict’s Abbey, Fort Augustus, where he was professed eighteen months later. In consequence of the appearance of symptoms of consumption, he spent the greater part of 1900 in the Cotswold Sanatorium, and in that, belonging to the Fathers of the Society of Jesus near Petworth. He received the priesthood in 1901. Since then, his health has often necessitated long periods of rest and writing, in which he ordinarily took much pleasure, was sometimes a great labour. Besides his humorous contributions to the “Glasgow Observer,” articles from him appeared in other journals, whilst lately he devoted much time to a life of his father, the late Sir Frederick Weld, which promised to be a work of great interest. This, he was forced to give up shortly before Christmas, since which date the disease steadily grew upon him, until death relieved him from his sufferings on the afternoon of Thursday, March 5th.

The body was carried to the church on Sunday afternoon, when Vespers of the Dead were sung, At 8.30 on Monday morning, the Office of the Dead began, followed by Pontifical Mass, celebrated by Right Rev. Leo Linse, O.S.B., Abbot of Fort Augustus. The singing by the large body of monks of the beautiful Requiem Mass was most impressive, as was also the “In Paradisum,” sung as the body was borne through the cloisters. From the great east door of the Abbey, to the cemetery where the storm would have made singing difficult, four pipers of the Kilchumin Band played “The Flowers of the Forest.” After the blessing of the grave, the Benedictus was sung as the body was lowered, and again, the singing was relieved by the strains of “Lochaber No More.” As the procession returned to the Abbey, half a mile distant could be seen at Calvary, which Father Basil’s mother had erected, at the foot of which she is buried. She entered the Benedictine Convent there, two years before her death, and took her vows by special dispensation, upon her deathbed. One of her daughters is the Prioress, whilst the other brothers and sisters, one is Carthusian and two are Nuns. The large number of persons from the neighbourhood who attended the funeral, was a mark of the affection in which Father Basil was held, whilst to his Brethren in religion, he was indeed a constant source of edification.

An English correspondent writing of the death of Dom Basil, says :— The Benedictine Abbey of Fort Augustus has suffered a loss which will evoke general sympathy by the death on March 5 in his thirty-fourth year, of the Rev. Dom Joseph Basil Weld, O.S.B., who had been a member of the community for sixteen years. Three of his sisters are nuns, one of them being the Prioress of St. Scholastica’s Convent, Fort Augustus, and his brother Raymond is a professed monk and priest of the Carthusian, at St. Hugh’s Charterhouse in Sussex.

Father Basil is not buried in the monk’s cemetery