Dom Benedict Seton OSB who was raised to the priesthood recently enjoys the distinction of having received the three major orders in three days. He is a Fort Augustus (Scotland) monk and a member of a family closely connected with Mary Queen of Scots. His elder brother is Sir Bruce Seton, of Edinburgh, and his younger brother, Dr Walter Seton, of London university. Dom Benedict entered the church whilst serving in His Majesty’s forces during the world war.

From The Bulletin of the Catholic Laymen’s Association of Georgia 17 April, 1926 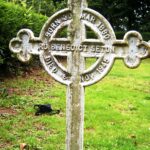