When war broke out in 1939,  Fr Peter Walter, Fr Cuthbert Wilson and Fr Denys Rutledge left the monastery to serve as chaplains to the Forces.

In 1952 he succeeded the Headmaster as the monastic Librarian and in 1960, was appointed Prior.

Latterly his health failed him and after a wheelchair lift was installed outside the monks’ Refectory, Fr Cuthbert was able to regularly attend at morning coffee in the Calefactory whereas for many years his only excursion to ground level was to have Christmas dinner with the Community.

He became as resident at the Hospital of St John of God, Scorton in Yorkshire.

On 1 September Fr Cuthbert Wilson died after a long illness. The School knew him as the blind priest who might be seen sometimes in his wheelchair on the sanctuary, concelebrating Conventual Mass. Fr Cuthbert, however, had had a varied life. He had worked in the London Stock Exchange, studied Canon Law in Rome, been Chaplain to the Highland Light Infantry and Prior of Fort Augustus from 1960-64. He spent two long periods in the USA.

After he lost his sight, his radio and talking books were valued resources. At times he was in much pain, which he endured patiently. The end came quickly. He was 76 years of age, a monk for 53 years and a priest for 42 of them 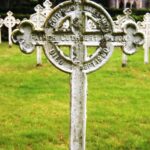 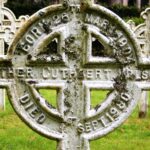