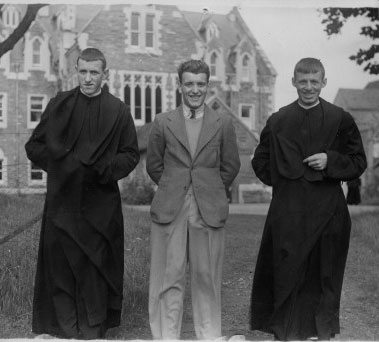 Born George Ignatius Carruth, the eldest child of George and Giacomina  Maria (née Corti) Carruth on 18 April 1910 in Paisley. Fr Edmund was one many children which included Joe Carruth (who himself came to study at Fort Augustus and joined, for a short period, the Abbey and later went on to play for Celtic.)  Fr Edmund was educated at Fort Augustus and entered the monastery directly from the school. He gained his rugby colours in 1926 (with J Eaves – later Abbot Oswald Eaves and J McCombes – later Fr Ethelbert McCombes) as well as his cricket colours in 1926 (together with R McKillop (Father Andrew MacKillop) and 1927 (together with H Boultwood – later Abbot Alban Boultwood and and J McCombes – later Fr Ethelbert McCombes). Between 1926 and 1929, there was always a Carruth on the rugby colours board (1926 G Carruth (Fr Edmund), 1927 J Carruth (Fr Aloysius), 1928 J Carruth, D Carruth, 1929 D Carruth) and likewise of the cricket colours board 1926 G Carruth, 1927 G Carruth, 1928 J Carruth, 1929 J Carruth, 1930 D Carruth

Father Edmund went into the monastery straight from school to university.

On the 29 September there was additional cause for rejoicing when four Old Boys entered the Noviatiate – George (Edmund) Carruth, Joseph (Clement) King, John (Ethelbert) McCombes and John (Oswald Eaves).

Brother Edmund was sent to St Andrews Priory in Edinburgh to undertake his degree together with Brs Denys Rutledge, Ethelbert McCombes and Andrew McKillop. In 1934, he was awarded the degree of MA with Honours in German from Edinburgh University.

Later in 1934, he was solemnly professed and on 2 August was raised to the diaconate (together with Fr Anselm Richardson). On 1 August 1937, together with Fr Anselm Richardson, he was ordained Bishop Bennet (on Old Boy) and, at the same mass, Bros. Ethelbert McCombes, Andrew McKillop and Maurus Whitehead received the diaconate and Bros. Alban Boultwood and his brother Aloysius Carruth the subdiaconate on the same day. 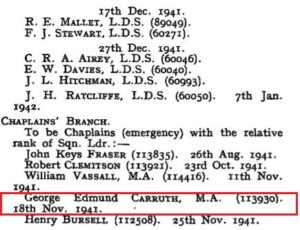 On 18 November 1941, Fr Edmund joined the Royal Air Force as a Chaplain (Squadron Leader) as notified in the London Gazette of 27 January 1942.

In 1940, Fr Edmund was reported as seeing the Loch Ness Monster “I was out in a boat with two friends in bright sunshine.” Edmund Carruth the prior, recalls that summer day in 1940 “She surfaced not 200 yards away, played around for a while and had a good gawk at us before she swam away. I thought I detected a smile on her face as she dove out of sight.” Fr Edmund subsequently appeared in person in a Youtube documentary on the Loch Ness Monster (Monsters, Mysteries or Myths 1974 by Rod Serling).

He was recalled from Carlekemp in April 1965 to become prior at Fort Augustus.

In 1971, he was the parish priest at Fort Augustus and Invermoriston. 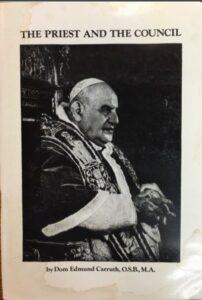 Fr Edmund died suddenly on July 2 1988, aged 78 and is buried in the Abbey monastery. 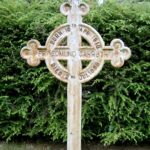 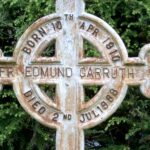