Fr Edward was born in Hagerstown, Maryland.  From 1911 to 1921, he taught at Mount St. Mary ‘s College in Emmittsburg, Maryland.

Fr Edward joined Fort Augustus Abbey in 1926 at the same time as Frs Denys Rutledge and Cuthbert Wilson after he had completed his PhD at the Catholic University of America.

He joined the new St. Anselm’s Abbey School, Washington, D.C in 1941 as Assistant to the Headmaster.

He became an eminent academic – Rev. Dr. John Edward Rauth – specialising in Psychology and become a professor at the Catholic University of America.  He co-authored many books and academic papers; 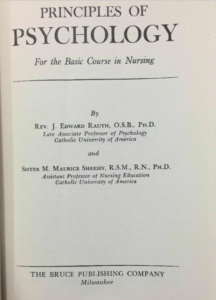 His obituary appeared in The Evening Star (Washington DC) Tuesday March 6 – and is reproduced here;

The Rev. Dr. John Edward Rauth, O. S. B., associate professor of psychology at Catholic University and instructor at Trinity College, died of a heart attack late yesterday at St. Anselm’s Priory of the Benedictine Fathers, Fourteenth street and South Dakota avenue N.E. Dr. Rauth conducted his classes at the university yesterday morning. He then retired to the priory, where he became ill. Requiem mass will be celebrated! at 10:30 a m. Friday at the National Shrine of the Immaculate Conception at the university by the Rev. Dr. Thomas Verner Moore, supervisor of St. Anselm’s Priory. The Rev. Dr. Cornelius J. Connelly will serve as deacon and the Rev. John J. Rolbiecki as subdeacon. The eulogy will be delivered by the Right Rev. Msgr. Edward B. Jordan, vice rector at Catholic University. Dr. Rauth, a native of Hagerstown, Md., taught at Mount St. Mary ‘s College in Emmittsburg, Md., from 1911 to 1921. Awarded his doctorate in psychology at Catholic University in 1926, he went to Fort Augustus Abbey in Scotland to join the Benedictine Community. He taught psychology as a layman at Catholic University from 1928 until his ordination at St. Anselm’s priory in 1940. * During the World War he interrupted his teaching duties at Mount St. Mary’s to serve as a lieutenant in the Chemical Warfare Service. He is survived by four brothers, Harry Rauth of the department of visual aids at Catholic University, and Philip, Richard and William Rauth, Philadelphia, Pa., and three sisters. Miss Ann Rauth, Baltimore; Miss Helen Rauth, Hagerstown, and Sister Mary Magna, Pottstown, Pa

Father Edward is not buried in the monk’s cemetery