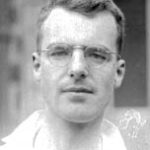 Born in 1913 in Glagow and baptised Andrew MacBride, Fr John Baptist was educated at Hillhead High.

He was clothed in 1934 and on Sunday 30 July 1939 was conferred to the diaconate together with Brs Jerome Ireland and Laurence Kelly by Bishop Bennett of Aberdeen, (himself an Old Boy). He was ordained 2 years later.

In October 1939, Br John was introduced into the school to help teach languages.

In 1940, with food shortages starting to appear, Fr John would head out onto the loch to help provide food for the school by fishing. He was also a very keen sailor and in 1953  took ownership of a sailing vessel called Grey Goose. References in The Corbie to Fr John Baptist’s exploits on Gret Goose are documented;

1953; For Fr John, a new and fruitful relationship had been born. As he wrote in The Corbie:

At 6.35 pm on the Feast of St Benedict, Grey Goose rounded the boathouse breakwater and picked up her moorings in the Abbey Bay.[i]

Along with Duncan Gilmour and Dr Slorach, Fr John had sailed his new vessel from the Leven, through the Clyde, the Crinan Canal and finally the Caledonian Canal to Fort Augustus;

As we drew near the top lock at Fort Augustus, we were hailed by Father Abbot and Father Cyprian from the bank. They did not come on board with us through the locks as they had to be back for Vespers. Quite a small crowd had gathered to see the arrival of the Grey Goose. We took on board a crew of Old Boys who did all the donkey work of getting her through the locks, picking up the moorings in the bay, and launching the dingy. Most of the School were on the breakwater to welcome us.[ii]

Only those who have sailed can, I suppose, appreciate the relationship between a boat and her master. Sailing is something worthwhile, and I hope it is going to be possible to instil something of it into what Commander Farie calls the ‘young idea’.[iii]

He would regularly sail the vessel up and down the loch.

In 1960, Fr John Baptist moved to Carlekemp to teach RK, English, Latin and Geography. His sailing responsibilities and make up expertise were undertaken by Fr Vincent.

In 1962, he published a book of Gaelic prayers (MacBride, J. Andrew edit. Iùl a’ Chriòsd aidh (Guidance of the Christian). Stirling: Learmonth & Sons, 1963.). This was the second edition of a collection of typical Catholic prayers and devotions, including the text of the Mass.

It was reported in The Corbie that in 1973 Fr John Baptist, together with Fr Thomas McLaughlin went to Switzerland to stay with the monks in the Abbey of Engelberg. They made a pilgrimage to the Shrine of Our Lady at Einsiedln and another to the tomb of St Nicholas.

In 1976, he went up to Fort Augustus to help with the teaching of the new summer schools.

In 1978, he returned to Fort Augustus when Carlekemp closed in 1977 and taught in the school.

On Fr Vincent’s premature death in 1983, Fr John and Fr Franic stook over the housemastership of Vaughan.

Father John Baptist died in 1998 at Ampleforth where he spent his last six months.  He died of Parkinson’s on 24 April 1998 and was the last monk to be buried in the monks monastery at Fort Augustus. 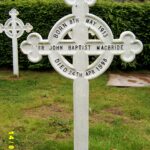 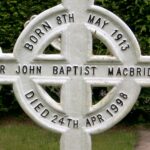