Educated at Blairs College and Valladolid (Scots), he held the office of prefect of school and prior (three times)

He started as a seminarian, then Belmont and was appointed (to his astonishment) as Prior(Superior) by Rome 1886, personally selected by the Pope because he was a Scotsman (Whelan, Annals 1.272; cf M.Butler, Holme Eden: the nuns of Fort Augustus, 2006 pp 13-15). 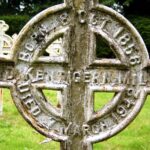