Report Annual Dinner 2019: This was our 23rd Dinner at OB Maurice Taylor’s Holiday Inn, and was once again a night to remember. The meal was first class, washed down with fine wine from Maurice and Bennies from Ralph. Friendships were rekindled and school memories recalled. Our guest speaker Liam Devlin an Old Aloysian and member of the lord lyon Register of Heraldry gave us an interesting insight into Coats of Arms especially the Abbey’s benefactors arms which were displayed in the monk’s refectory windows.

This year’s dinner will cost £39 a head, and accommodation with our usual OB discount will be the same as last year double/twin £109 and single £99 including full Scottish Breakfast. Please book early as there is a limited availability at this price and remember to ask for the OB discount. I believe last year some left it too late. To reserve accommodation phone 0141 3528305 and to book for the dinner Ralph Giulianotti 01738 624674. Partners are most welcome. Unfortunately this year’s speaker Mark Dallas project manager of the Highland Club, who was to give us an insight into the development of the Abbey into the now successful club has pulled out of the dinner due to the uncertainties of the coronavirus. However our historian O.B. Dr. Mike Turnbull has stepped into the breach and will give us a talk and power point show on “Things you didn’t know about the Abbey.”

Jottings from the School Chronicle 1952. (Three Weeklies) On Monday there was a school holiday. We got up at the usual time, had breakfast and went into lessons as usual. The day before there was a rumour of a holiday, but no one was certain. At ten Fr. Laurence came into the study and told us we had a holiday till ten the next morning and we were going out in parties. First of all, everyone went down to the village to buy grub, mostly tinned food, soup raspberries and suchlike, though iron rations had been provided by Bro. Placid. The party I was in went at eleven o’clock and Bro James was in charge. He said we were going to Loch Lundy, about seven miles away. We started out in high spirits, few of us knowing how far our objective was. For the first part of the walk the sun shone brightly, but soon the clouds came over to damp the spirit of happiness. The road on which we walked got steadily worse and worse. After passing through the forest we stopped by a stream for lunch. We got our fires going, cooked a meal over the fire, or in a billy-can, and when we had finished, we played games, sang songs, and remade the fires for tea. We stayed there for two or three hours. The journey back along the canal bank was longer, but the going was much easier. In the evening dusk we trooped back into the school, rather footsore, to tell long and exaggerated stories of how far we walked. N.C. (Nigel Clark?)

News: Our Vice President Owen Halloran has had a long spell in hospital recently, please remember him in your prayers. Chris Stephenson has generously been donating the money we give him for sending out the Newsletter to the Highland Hospice who have sent a poster of thanks to the OBs. There will be no visit to Ampleforth this summer as the Abbey is in total lockdown. Recently we have had the sad news of the deaths of two OBs due to the covid 19 virus, Fr. Michael Benedict Seed and Alasdair Fraser Macdonald obituaries printed below.

Deaths: Fr. Antony Hain: OSB, MA. (1952-2019) Latterly of Ampleforth Abbey. He graduated in 1974 with a University of Wales degree. Antony was ordained a priest in 1983 at Fort Augustus where he served as Junior Housemaster (1983-1988) a Junior English Master (1984-1988) and Junior Assistant to the Bursar (1988-1998). While at Ampleforth, he registered as a postgraduate student at the nearby College of St John, York. There he completed two research dissertations, one was on Church History and the other on Religion and Ethics. These resulted in the conferment of an MA degree in 2003. In the last year of his life Fr. Antony developed epilepsy. He underwent surgery in Hull and recuperated in York Hospital before returning to the infirmary at Ampleforth where he died of pneumonia and was interred in the wooded monastic burial ground high above the Abbey. 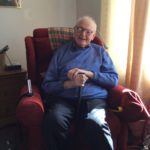 Fr. Michael Benedict Seed: (1933-2020) was born, at Duns in the Scottish Borders one of a family of seven brothers and one sister. He was educated at the Abbey School, Fort Augustus where he entered the monastery of St. Benedict, being clothed on the 3 Nov 1950 and professed on the 5 Nov 1951. He was sent to study Theology in Rome at San’ Anselmo College (a fellow –student being the future Bishop Ambrose Grifiths OSB) and was ordained at Fort Augustus on the 28 Oct 1956. In 1958 he began a degree in Science at Queen’s College Dundee (part of St. Andrews University), returning to the Abbey School to teach Science and Maths. On the 23 Dec 1970 he worked as a teacher in New Zealand, being sadly missed at Fort Augustus for his service as a groundsman, fireman in the local brigade, a beekeeper, brewer, wine-maker and as a climatologist. On his return in 1972 he was appointed housemaster of Lovat House and in 1985-1987 headmaster. After closures of the school and Abbey, he was dispensed from his monastic vows and was incardinated in the diocese of Aberdeen 1999. He served as parish priest of Brora for 16 years. He retired in 2013. In 2019 he was invalided to St. Joseph’s (Little Sister of the Poor) at Robroyston, Glasgow. He died in the Royal Infirmary, Glasgow on the afternoon of Sunday 19 April 2020, one of twelve recorded deaths in Scotland of Covid-19 that day. Alasdair Fraser Macdonald: (1947-2020) was the youngest of five children of Angus and Grace Macdonald. He attended Carlekemp Prep School in 1954 before following his brothers Angus and Iain to FA Abbey School in 1959. When he left school he started an indenture as a CA in Glasgow. However when his hotelier father sold the business in 1967 he followed his parents to Jersey to help them in the running of two hotels the Leoville in Jersey and the Balmoral in Alderney. When the hotels were sold Alasdair joined the Legal and Financial firm of Bedell Cristin until his retirement in 1988. In earlier days Alasdair was a keen skier and squash player, but his first love was sailing in his boat called Gronia named after his mother. At one stage he was secretary of the St. Helier Yacht Club. A favourite uncle to all of his nephews nine of whom followed him as OBs. Alasdair was a great raconteur and will be missed by many. He died in the Lakeside Care Home Jersey on 17th April of suspected Covid 19. Our chaplain Fr. Stephen Dunn will remember them in his prayers and masses. RIP.