This newsletter is late in coming out as it usually appears in April, but we held it back hoping things would ease re. coronavirus and we would have our annual dinner in October, but sadly we have had to cancel it for the second year.

The exciting piece of news this year is that our webmaster Colin Bryce has been very busy putting our book Abbey Boys into Kindle format on Amazon. His report follows. 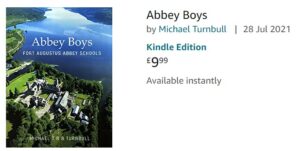 Abbey Boys, the book about the Abbey School from 1876 until its closure in 1993, has been republished as a kindle eBook. The text remains the same but now has 150 photos added including many sports teams photos from as far back as 1923. The Sports Colours list has been updated and two additional appendices provided; Girls at Fort Augustus and a list of OBs who took up vocation in the priesthood. Kindle eBooks can be read on smartphones, tablets and computers using the Kindle app as well as being available on an Amazon Kindle itself. Abbey Boys can be downloaded from the Amazon website or just search Fort Abbey Boys under Books. It is priced at £9.99.

Creating the Kindle edition has been an interesting project as the text for the original book was stored on old storage media (Iomega Zip drive) and needed to be sent to a specialist data transfer firm to extract. Once extracted, the format was identified to be on software no longer available and was unreadable. Some conversion software had to be found to ‘extract’ the raw text before being able to format in Word. Word was used as the basis for the new version before importing to Kindle format using Amazon’s Kindle creation software.

The advantage of a Kindle version of the book means it is portable and can be read anywhere. Once the eBook is purchased, it can be read on many devices which have the same Amazon account configured. Other advantages are that;

Whilst going through Abbey Boys page by page, some interesting facts are provided;

Very many thanks Colin from all of us on this monumental task of converting Abbey Boys to eBook as we still get people wanting to buy the hard copy which sold out years ago. Mike Turnbull’s book will live on.

The Kindle edition can be found here

My mother had been at boarding school so I believe she felt the experience worth the money. I went to Carlekemp in 1948 and left the Fort in 1959, eleven years in total at establishments later much maligned in the recent Abuse Enquiry. As I said in my written report to the Enquiry my days at the two schools were some of the best times of my life. Being fairly good at sport undoubtedly helped to mitigate some of the harsher aspects of life, particularly at Carlekemp where corporal punishment was a regular feature of life. Notwithstanding that I came away with many happy memories, some great friendships that have lasted until today and a lifelong love of the scenery and environs of the two schools. In addition, I came away with a great admiration and respect for a number of the staff in both schools, which has remained undimmed by the passage of time and the benefit of hindsight. In short, I consider it a privilege to have been able to spend my formative years in two such places and although I don’t think the experiences of the two schools changed me, I do believe they were the major influence on the adult that subsequently emerged.

First thoughts were how remote and bizarre it was to be living as a boarder at a Fort run by Benedictine monks. The mostly Scottish accents from people and students all around me were also fairly new to me. I started as 5th Form, since Fr. Francis had me take an A level for maths that I apparently didn’t do well in, so he felt that I was not qualified for 6th Form. However, I was promoted to 6th Form a few weeks later when my parents got involved. That’s when I moved from Lovat 5th form dormitory into the only available room in the 6th form, i.e., the Paint Room, in which the hot water radiator didn’t work. I remember many cold nights in that room! I was part of the Lovat house since my brother, Hubert, was part of that house during his one year stay from Sept.1973 – May 1974.

I choose navy to be a part of and was happy to be in a smaller group. I learned how to salute properly, using all four fingers extended (instead of the Boy Scout’s salute that I was familiar with), participated in marching in step in front of some important military men from Fort William, and I learned some navigation on small ships in Loch Ness.

At one time, two other boys and I used the three available Kayaks to cross to the other side of the loch sometime around tea-time, we left while it was daylight, but returned while it was dark. There were two fiberglass kayaks and one slightly leaking wooden kayak. I had the wooden one but it was an experience I’ll never forget.

I remember having had a couple of piano lessons from one of the Fathers who happened to have seen the Loch Ness Monster. He rapped my hands so hard on the piano keys when I misplayed, that I quit taking these lessons (perhaps Fr. Gregory). I remember playing rugby in the cold weather and participated in at least one game as a ‘wing’. The ‘rucks’ were something to remember alright  and all the hard hits when I had to stop an opponent carrying a ball.

Teatime and mealtimes were interesting in the commonly presumed order of lines, i.e., 6th formers first etc. Sometimes the first got the remaining scraps of something delicious. I didn’t find it appropriate to teach small students that kind of order.

Then there was the “store’, most of the time manned by an extremely friendly Brother whose name escapes me at the moment. He was a little overweight and a little short. He interacted positively with all of us (perhaps Bro. Adrian). The candy in the store was wonderful. Then we had a fellow boy who was perhaps of African descent who played the bagpipes.

How has it impacted my life.

It definitely made me aware of and appreciate that there are alternative ways to educate and raise children to render into members of society. Very few days go by without my having had either a passing thought or even a deep reflection of my brief experiences at the Fort. I even came back with my father in April 1997 and we sat with Fr. Benedict in the cafeteria. I recorded a video of my entire trip that year including the short clip of Fr. Benedict. I hope I still have the footage somewhere! The Fort experience is deeply within me and always will be. Hello fellow OBs, I am so glad you still have my email address and are still keeping in touch with OBs!

Deaths.  Fr. Hugh Shannon Sept. 2020. He was ordained on 21 Feb. 1970 at St Mary’s Cathedral by Cardinal Gray. He became the second Old Carlekempian to be ordained; the first was Fr. Francis Davidson. Four days later, Fr. Hugh returned to Carlekemp to say one of his masses in the chapel. He spoke to the boys afterwards and gave each one his blessing.

Robert Swift Died in Italy at Christmas while in hospital with two broken legs. At the Abbey 1949-54 (Prefect).

Our chaplain Fr. Stephen Dunn will remember them in his prayers and masses. RIP.

Do not forget to see other OBs’ news, extended Obituaries, photos etc., on the Website:  www.corbie.com