News Flash At Church today 27 April 2011 it was great to see Fr Stuart Chalmers wearing the vestments donated by the OBs’, We were also delighted to see the OBs’ memorial returned to its former position waiting for its refurbishment and re-dedication. See OBs’ Website for Photos of both. 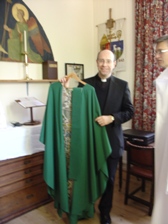 Dinner Dance: Organised by Martin Waugh and Colin Peteranna at the Lovat Hotel Fort Augustus, preceded by a champagne reception at the Caledonian Hotel. By all accounts it was a great success. They had an auction which raised £400 for the Highland Hospice — well done. The next day the fragile OBs won the cricket match against Fort William by four runs (89 to 85). It’s amazing what drink can do! The organisers have decided to make the Dinner Dance a bi-annual event so 2012 will be the next one.

ANNUAL DINNER:  Held as usual at OB Maurice Taylor’s Holiday Inn, Glasgow, it was once again a great night. Top chef Gerry Sharky’s meal was superb and the service first class. Thanks to Maurice, Alasdair Macdonald and Ralph for the wine, port and bennies. The speaker, Leon Marshall CA who used to audit the books at the Abbey gave a witty and amusing speech. Then the well fed and watered OBs swapped news and remembered times gone by until the wee small hours.

70th ANNUAL DINNER 8 OCTOBER 2011 As this year is The 70th Anniversary of the OB Association, his Eminence Keith Patrick Michael Cardinal O’ Brien has kindly agreed to be our guest speaker. The dinner for OBs and partners will be at the Holiday Inn, West Nile Street, Glasgow G1 2RL preceded by the AGM at 7.00 pm prompt. The cost of the dinner will be £35 per person. Accommodation with the usual OBs’ discount is Double/ Twin £89 and Single £79, including full Scottish Breakfast: reservation number 0141 352 8300. Next door is Holiday Inn Expressway where it is £69 Bed and Continental Breakfast. Please book early to Ralph Giulianotti tel. 00 44 (0) 1738 624674. ralphandgay@tiscali.co.uk

NEWS It was agreed at the AGM to send £500 to Fr. Giles Connacher, a Cistercian of Pluscarden Abbey who is leading a community of monks in Africa. Fr. Giles was the nephew of the Carlekemp accountant Paddy Connacher and had also been taught at Fort Augustus by Fr Augustine Grene.

Papal Visit A reply to the letter we sent welcoming the Pope to Scotland was received from the Vatican Secretariat of State saying ‘The Holy Father has received your letter and he asked me to thank you. He appreciates the sentiments which prompted you to write to him.  His Holiness will remember you and the alumni of Saint Benedict’s Abbey School in his prayers. He invokes upon all of you God’s blessings of joy and peace.’

War Memorial To commemorate our Association’s 70th year the OBs at the AGM agreed to renovate the OBs’ War Memorial which is at present at the Lodge Chapel car park and relocate it to its original site on the drive. Fr Benedict, our President, will rededicate it probably in May. Notification will be given on the website www.corbie.com

Community news: Fr. Edward Delepine aged 92 is back at Ampleforth recovering after an operation for a restricting bowel cancer. The good news is the surgeons found no spread of the disease. Fr. Francis Davidson, now Sub-Prior, Fr. Antony Hain and Fr. Bernard McInulty are still at Ampleforth; Fr. Aelred Grugan is at St Mary’s Whitehaven, Cumbria; Fr. Stephen Geddes is in Weymouth, Dorset; Fr. Paul Bonici is back in Malta. Our President Fr. Benedict Seed is still PP at Brora, Sutherland. Ad Multos Annos.

DEATHS James Marin died peacefully in Edinburgh on Dec. 20th 2010 aged 82 years. He attended the Abbey School 1938-1944 and ran the firm of Thomas Marin, Funeral Directors in Edinburgh. He is survived by wife Pat and children Iain and Jane. RIP. Chaplain Fr. Stephen Dunn will remember him and all deceased OBs in his mass for the dead.

Return to Newsletters
Go to Top