Captain Alasdair Watson, who has died aged 87, was, as commanding officer of Motor Torpedo Boat 5001, involved in one of the last naval actions of the Second World War in the North Sea. On 6th April 1945, with no moon and no phosphorescence, conditions ideal for attack operations, six German E-boats based at the Hook of Holland came out to make a last gesture of defiance and were well across the North Sea before they were picked-up by a Wellington bomber specially equipped with radar and VHF communications. As the E-boats closed the line of buoys through which convoys passed, the frigate, HMS Cubitt, came down from the north at high speed and opened fire causing the E-boats to turn north into the trap that had been set for them. 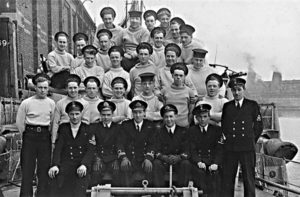 MTBs 781 and 5001 were lying in wait further north and were ordered to steer west and were almost on top of the enemy when they sighted them heading at right angles across their bows. MTB 781 passing close astern and raking the enemy with gunfire just missed ramming the nearest E-boat. MTB 5001 broke through the enemy’s line, exchanging fire with the boats port and starboard. Turning to starboard in a classical Nelsonian manoeuvre both MTBs continued to engage the enemy at close range and the E-boats swung round to escape to the south-east. Although badly damaged the E-boats returned fire hitting 5001 in the engine room. Unlike the German boats which had diesel engines, the British boats were driven by highly flammable petrol stored aft, and shortly afterward 5001 was a mass of flame. MTB 781 turned to the rescue by meeting 5001 bow-on, to avoid the impending explosion of petrol astern, enabling the crew to effect a narrow escape by jumping in the dark from one vessel to the other.

Alasdair Macdonald Watson was born in the family home in Cambridge Street, Edinburgh on 24th February 1920, the eldest of five children. His father, Alexander Pirie Watson had been a surgeon and TA (RAMC) medical officer who served in the Great War. His mother was Ann Macdonald, a nursing sister in Queen Alexandra’s Imperial Military Nursing Service, who served in Salonika during the Great War. They had met in Edinburgh before the war. His paternal grandfather was a Master Mariner. At the age of five his first interest in the Navy was sparked watching the destroyers manoeuvre amidst the fleet exercising in the Firth of Forth.

Alasdair was educated at the Edinburgh Academy from the ages of six to sixteen; and was then transferred to Fort Augustus Abbey School to round-off his education. He immediately took to the school and later in life expressed the wish he had been there from a much earlier age. He excelled at rugger and won his school colours in 1938 and was a school prefect from 1938 to 1939. His interest in the sea was further encouraged by the headmaster, Commander Fairie R.N., who had served in the Great War and who purchased an old sea-going fishing boat for use by the boys from the Abbey jetty on the shores of Loch Ness.

On leaving school he enrolled as a medical student at Edinburgh University in 1939 and, although his father most likely wished his son to be a doctor, the boy was bound for the seas and enlisted on 2nd August 1940 as an Ordinary Seaman in the Royal Navy and joined at HMS Rooke in Rosyth. He served in the defences of the Thames Estuary from whence he had a grandstand view of the Battle of Britain fought out in the skies overhead. In January 1941 he was drafted to join HMS Vesper a 1917 V&W Class destroyer and he reported “I had no sooner stepped on board when we were off to sea on Anti-E-Boat Patrol and North Seas Convoy Escort Duty”, during which he carried out the duties of bosun’s mate and a member of a gun crew. “We fired our guns in anger that night.” Such was Alasdair’s baptism of fire.

In February 1941 the ship underwent a long refit in Chatham Dockyards; so by good luck he was granted ten days leave to enjoy his 21st birthday at home. He was posted to Lancing College for six weeks, arriving, rather ominously, on Friday 13th June 1941, followed by six weeks in Hove, Sussex where training took place. At Hove they lived in garages and started one of their days, the 21st August 1941 as naval ratings and by evening were Lieutenants in the Royal Naval Volunteer Reserve.

Alasdair opted for Fast Motor Boats and in October became, what he described as, a spare Lieutenant in the twelfth Motor Gun Boat Flotilla; and thereafter was posted to HMS St. Christopher at Fort William to learn about Motor Boats and took time out to lead a party of naval officers on a trek to the summit of Ben Nevis.

In January 1942 Lieutenant Watson was appointed 1st Lieutenant of MGB 326 and in February 1942 took part in Operation Biting the raid on the German radar installation at Bruneval on the French coast north of Le Havre.

On the night of 27th/28th February 1942 HMS Prins Albert, carrying thirty-two commandos and six Landing Crafts Assault with an additional four soldiers per craft with Bren guns, sailed from Portsmouth to the French coast escorted by five motor gun boats and two destroyers. On the same night twelve Whitley bombers, of 51 Squadron, 38 Wing, Royal Air Force, carrying ‘C’ Company, 2nd Bn Parachute Regiment, a section of Royal Engineers, an RAF Flight Sergeant and a German interpreter, departed from Thruxton airfield in Hampshire. The airborne assault group was dropped near the German radar station at Bruneval and attacked the site to enable an expert to photograph the equipment and take significant parts back to Britain. The commandos were launched offshore from HMS Prins Albert in their Landing Crafts Assault to land on the French coast near Bruneval to support the attack and capture the beach to be used as an escape route. Much to the airborne party’s concern the navy was not at the beach at the appointed time for rendezvous. The Royal Navy rescue party had encountered a German convoy passing between them and the beach and were obliged to halt progress silently in the dark until the enemy had sailed past oblivious of their presence.

The raid succeeded in capturing vital components of German radar along with a German operator which were ferried to Portsmouth in MGBs at a speed of more than twenty knots. The paratroopers and commandos returned to Portsmouth in the landing crafts either under their own power or towed by motor gunboats. An hour after dawn they were protected from the Luftwaffe by RAF Spitfire fighter cover overhead and earlier by four Free French chasseurs and two Royal Navy destroyers. They were welcomed with a party on board HMS Prins Albert and feted by journalists. As a result of this raid British jamming of German radar was improved preventing the detection of many Allied bombers thereby ensuring their safe return, a significant contribution to the bombing of German aircraft factories achieving eventual Allied air superiority. In addition German radar sites were henceforth surrounded by immense networks of barbed wire, the grass in which was untouched by cattle, resulting in the easier detection of radar sites from aerial photographs. This, together with aerial superiority and the jamming of German radar, was of vital importance to the success of Operation Overlord on 6th June 1944 D-Day Normandy.

From May 1942 he took part in commando raids on Boulogne and Etaples and in June 1942 was involved with surveys for new radar and Combined Operations exercises.

On 19th August 1942, as 1st Lieutenant of MGB 326, Alasdair was navigation officer for the boat which acted as navigational leader for the main landing at Dieppe, Yellow Beach. Due to his insistence that an alternative channel was used they were only three minutes late in landing and for his part in the Dieppe raid he was mentioned in despatches.

Lt Watson served in the 12th and 14th Motor Gun Boat flotillas which were earmarked for clandestine operations, dropping and retrieving agents on the French coast, beach surveys of the Bay of the Seine, escorting Fleet minesweepers preparing for the invasion, “Hostile” mine-laying operations off the Channel Islands, and numerous raids and surface actions in the Channel and off the Normandy and Brittany coasts.

As 1st Lieutenant of MGB 317 he took part in mine laying operations off the Channel Islands and was again mentioned in despatches.
MGB317 conducted clandestine night-time surveys of the Normandy beaches taking frogmen to within three miles of the coast and then waiting at anchor for their return with beach soil samples.
In 1944 April he was appointed to command MGB 330 and conducted pre-D-Day exercises in the English Channel and took part as Navigational Leader guiding the assault wave of Landing Crafts Assault in Operation Neptune from Portsmouth to the beaches of Normandy on 6th June 1944. MGB 330 led in landing craft to Juno J2 beach off Bernieres-sur-Mer and further escorted HMS Prince Henry, a Landing Ship Troops, to Juno beach. Here occurred one of life’s coincidences; Prince Henry carried the 1st Battalion Canadian Scottish regiment. Alasdair’s cousin, Lieutenant Ian Macdonald, was serving with Canadian Scottish and was escorted to his landing beach by his Scottish cousin commanding MGB 330. Four days later Lt. Ian Macdonald was killed on night patrol at Putot-en-Bessin on 10th June 1944. They had met earlier at a Combined Operations Mess in Portsmouth and Ian had visited the family home in Edinburgh.

Somewhat ironically, after the surrender of German Forces in May 1945, Alasdair was appointed Senior Officer German E-Boats based for evaluation at HMS Hornet, Portsmouth. He was awarded the DSC in December 1945 for his part in operations during the war.

In 1946 he re-enrolled as medical student; but decided university was not for him and thereafter found employment as a schoolmaster at Dalhousie Castle School teaching mathematics and later at Melville House, Ladybank and Clifton Hall School, Newbridge where he spent many happy years teaching maths, science, coaching rugby and athletics.

In 1951 he joined the Royal Naval Reserve at HMS Claverhouse and in 1958 was appointed to command HMS Scotia, a new naval training establishment in Pitreavie, Fife, which is now at Rosyth. In 1957 he commanded HMS Killiecrankie, a wood and aluminium built Coastal Minesweeper, on a two-week seaborne training exercise from Leith to the Humber. In 1963 he was promoted Captain and served as ADC to the Queen. He commanded H.M.S. Scotia for eight years until his promotion to command HMS Claverhouse, at Granton Square in Edinburgh. He retired from the navy in 1971.

In his retirement Alasdair was president of the Combined Operations Association based in Inveraray and it is significant that the shores of Loch Fyne, where he lived, was the scene of many practise landings for the liberation of Europe in 1944.
In 1960 he met and married Miss Isobel Elizabeth Crawford of Comrie with whom he spent many happy years until her death in 1994. They had no children. They entertained their many friends with typical Scottish highland hospitality.
Fiercely proud of his family descending from the Macdonalds of Keppoch, Alasdair wore the Keppoch tartan and is buried in the family plot at Cille Choirill, Roy Bridge, Lochaber.