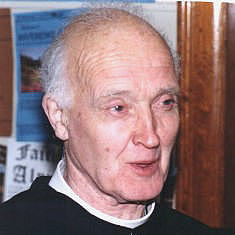 Robert Andrew (‘Bertie’) McKillop, Cathedral Prior of Bath and, for some years a member of the Benedictine Community at Downside, was born on 17 May 1908 in Airdrie, Lanarkshire, to Mary (née Cronin) and Robert McKillop, a furniture dealer, both parents having a passion for golf Bertie was educated at St Margaret’s, Airdrie, then at Mount Mellary School, Ireland for a year, under a regime which his mother decided was ‘too rough.’ Accordingly, in 1923, he was sent to the Abbey School, Fort Augustus, from 1923-1926, where he excelled at sports, particularly cricket. ‘He was a very fine batsman – and a very energetic but erratic bowler’, recalls Abbot Alban Boultwood, one of his contemporaries.
After leaving the Abbey in 1926, Robert worked as a steward on the Cunard liners for a year or so, but became disillusioned with this life and, in 1928, decided to return to Fort Augustus as a novice Benedictine monk, taking ‘Andrew’ as his name in religion. His innate love of speed soon made itself felt. ‘In those early years,’ remembers Abbot Alban, ‘ the novice monks or the juniors took turns as the early wakeup caller, whose duty it was to go through the corridors of the monastery knocking loudly on each monk’s door, calling Benedicamus Domino and waiting for the response Deo Gratias. On at least one occasion Andrew was late as caller, and could be heard tearing along the corridors like a tornado, banging on each door but not waiting for answers!

In 1930, Br Andrew was sent to St Andrew’s Priory School in Edinburgh, as an assistant teacher but also to study for a degree at Edinburgh University. He graduated from Edinburgh with MA (Hons) in History in 1934, a particularly fruitful year academically -. at Edinburgh Fr Edmund Carruth gained the degree of MA with Honours in German and Fr Denys Rutledge an MA with Honours in Classics.

On 1 August 1937, Br Andrew received the diaconate from Bishop George Bennet of Aberdeen, a former pupil of the School. As part of his teaching duties, Br Andrew taught swimming and took the under-fourteens out on the recurring ‘three-weekly’ holidays, one of which involved crossing Loch Ness by the whaler to Glen Doe boathouse. On 25 March 1939, he was ordained a priest at Quarr Abbey on the Isle of Wight. He returned to Fort Augustus to teach geography and serve as parish priest at Stratherrick, Glengarry and Fort Augustus for many years. Fr Andrew once even celebrated mass on the top of Ben Nevis, but it was his intense performance for the local shinty team which struck fear into his opponents, who, on seeing him approaching in his monk’s habit would groan ‘Oh no, here’s that black devil again!’

When Fort Augustus inaugurated the Air Training Corps Fr Andrew was appointed instructor in Meteorology and Physical Training. He also became editor of The Corbie, the school magazine. From the Spring of 1943 until the Winter of 1944, however, The Corbie remained firmly locked in its cage down in the Abbey Print Room. The Print Room lay at the end of an uneven cobbled floor in the Hanoverian dungeons under the Abbey floor. The Corbie continued to exist only in the imagination of its Editor, Fr Andrew, who apologised: ‘One cannot argue with the Paper Control Board.’

By 1944 the Air Training Corps was going from strength to strength, and Fr Andrew received his Commission as Pilot Officer. He had worked unsparingly as adjutant, having attended the OTS at Cosford and returned full of ‘gen’. Over the next few years Fr Andrew taught Geography, British (and Cricket) History. In 1966, he led the Forestry Group as part of practical Geography studies and started an Orienteering Club. In 1970, somewhat reluctantly, after well over thirty years teaching in the School, Fr Andrew went as Chaplain to the nuns of Stanbrook Abbey in Worcester. But, by 1975 he had returned to Carlekemp, the prep school in North Berwick, with a new venture, a summer school. It was on 6 October 1975 at Carlekemp that the idea of an English Language summer school was mooted. The first step was to determine what kind of programme a summer school could offer. Then a list of the best foreign newspapers and magazines in North West Europe was drawn up where advertisements could be placed – principally in Belgium, Holland, France and Germany.

On 1 August 1976 eight students arrived for the first three-week summer school. Fr Andrew was in charge. The students came from France, Germany and Switzerland. Classes were given in the mornings and the afternoons were devoted to sight-seeing. It was a great success. The following year twelve Spanish students came – six boys and six girls. In 1978 the summer school was moved to Fort Augustus. The School opened in the middle of July with thirty-three students. The 1979 Summer School had nineteen students, six Belgians, five French, four German, three Swiss and one Spanish. By 1980 there were again thirty-three students, forty-five the next year and fifty-seven in 1982. Eighty-three students arrived at Fort Augustus in 1984 and, when a second summer school was added in the Easter of 1985, there were an additional thirty-three students, a figure which jumped to seventy-five by 1989.

As well as being the prime mover of the summer schools, Fr Andrew was awarded the MBE in 1995 to honour him and his predecessors’ climate observations. These were undertaken at the Abbey since 1884 – Fr Andrew’s observations, assisted by Fr Benedict Seed, dating from 1929. Fr Andrew also took an active interest in Amnesty International and in the Samaritans.

Old Boy Chris Stephenson, by this time a teacher at the Abbey School, recalled the many happy hours spent as a member of the Summer School staff: ‘We worked and we played hard. Fr Andrew was behind it all. The locals called him Father Flat Out because they constantly saw his car whizzing around the village or setting off for Inverness. The students called him The Flying Scotsman. I know we made £30,000 profit on our last Summer School (that is, £10,000 a week profit).’

After the closure of the Abbey School in 1993 and of the Abbey itself in 1998, Fr Andrew retired in 1998 to Wellburn Home, Dundee, where he was well looked after by the Little Sisters of the Poor but even his indomitable spirit gradually succumbed to the effects of old age and his hearty but somewhat frenetic lifestyle. Having suffered a heart attack, he died there on 21 May 2002.

His funeral was held at St Peter and St Benedict’s church, Fort Augustus on Tuesday 28th May 2002 at 12.00 and he was laid to rest in the Abbey Cemetery.