Fr Antony was one of the last monks to enter the monastery in Fort Augustus. A truly humble and holy man.

Fr Antony Hain OSB, Benedictine monk formerly of Fort Augustus and subsequently of Ampleforth Abbey, died peacefully in the monastery infirmary on at Ampleforth on 12 February 2019, at the age of 66. 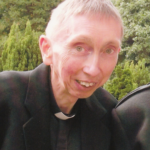 He was born in Ruislip in August 1952 and was educated in local schools before going to St David’s University College, Lampeter. He worked as a library assistant in the London Borough of Harrow and then an assistant teacher in Twickenham, before being received into the Catholic Church in 1972, and then joining the monastic community at Fort Augustus Abbey in Scotland, in 1975. Fr Antony was ordained priest on 20 March 1983 and in his time at Fort Augustus undertook a number of roles, including Junior Housemaster (1983-1988), Junior English Master (1984-1988), and Junior Assistant to the Bursar (1988-1998).

When Fort Augustus Abbey closed in 1998, Fr Antony moved to Nazareth House, Bonnyrigg, in Scotland. On 28 December 1999 he transferred his stability to Ampleforth Abbey and moved to the Abbey in August 2001.

In recent years, as his mobility declined, Fr Antony lived in the monastery infirmary, where he died peacefully on 12 February 2019.

Fr Antony’s funeral took place on Thursday 28 February, after which he was interred in the Monks’ Wood.