Fr Benedict Seed, who died yesterday of Covid19 at Glasgow Royal Infirmary, was born in 1933 of a large Catholic family. From boyhood until their closure in the 1990s, Fort Augustus Abbey and School were the centre of his life. He took monastic vows in 1950 and, after studies in philosophy and theology in Rome, was ordained a priest in 1956. He subsequently gained a science degree at the University of St Andrews. For many years he taught Chemistry and other subjects at the Abbey School, where he was also a House Master and, for a while, Headmaster. He was a sociable and engaging man of wide interests, including as an active member of the local Fire Brigade and keen bee-keeper. He was at home in the Highlands. 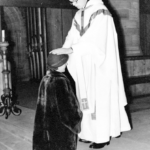 After the closure of the School, he engaged in parish work in the dioceses of Argyll and the Isles and Aberdeen, being incardinated into the latter in 1999. Subsequently, he became a Canon of the Cathedral Chapter. For 16 years, he was an appreciated pastor of the parish of Christ the King in Brora, Sutherland, a parish that embraced the entire county, coast to coast. He retired in 2013. In 2019 he moved to St Joseph’s Care Home, Robroyston

His last years were clouded by the past revelations emerging from Fort Augustus, though his natural resilience never left him.

It is touching that he died on the Octave Day of Easter, the Sunday of Divine Mercy.

May he rest in peace.