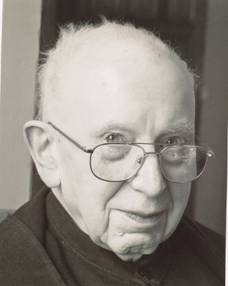 Fr Edward was the school bursar and was one of the last headmasters of the school prior to it closing. He was also a french teacher in the 1950s and 1960s. When the Abbey closed, Fr Edward retired to Ampleforth Abbey.

Fr Edward died on 16th November 2013 in the 96th year of his age, the 78th of his monastic life and the 71st of priesthood. He is buried in the monastery cemetery.

R.I.P. Our oldest monk Fr Edward Delepine died aged 95, at Ampleforth on the 16th November 2013.
The funeral was attended by OBs Mike Turnbull, John Welsh, Ralph Giulianotti and also Fr Stephen
Geddes. After a traditional Benedictine Requiem with Fr Francis giving the homily, the Community
processed to the hillside cemetery where the OBs laid a wreath in Abbey colours on behalf of the
Association. Afterwards there was a reception where we were able to spend time with our ex F.A.
monks. Fr Bernard McInulty has offered up a Mass for the FAOBA. Many thanks from the OBs to Fr
Bernard. Fr. Edward (1918-2013) Professed 1938. Ordained 1943. Died 16 November 2013 aged 95.
He spent 64 years as a monk of FA. He taught French for 12 years at Carlekemp and also at FA in the
1950s and 1960s. He served as School bursar and was one of the last Headmasters of the School prior
to it closing. On his retirement at the age of 75 he became chaplain to the nuns at St Mary’s Abbey,
Colwich. His last 13 years were spent as a monk at Ampleforth, where he was very well cared for.