On 11 August 2021, Lady Smith, Inquiry chair of the Scottish Child Abuse Inquiry, published her report The provision of residential care in boarding schools for children in Scotland by the Benedictine monks of Fort Augustus Abbe 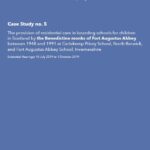 The report is a culmination of evidence from 43 witnesses who have appeared at the Inquiry or provided written evidence including former pupils, teachers, monks and relatives of former pupils.  It is a very comprehensive report (146 pages) and makes clear there was evidence of sexual and physical abuse, bullying and lack of leadership. Lady Smith speaks forthrightly about the experiences of the pupils, some of whom have suffered appalling abuse

(physical, sexual and psychological) and some of whom have never recovered from their experiences at Carlekemp or Fort Augustus. She identifies a small number of monks who were responsible for the abuse and how they moved between Carlekemp and Fort Augustus. She also reports that when “some children complained to monks in positions of responsibility about being abused. They received either non‑existent or inadequate responses.” She also identifies the emotional scars that some children suffered which were “… long‑lasting and debilitating, blighting their adult lives.”

The Fort Augustus Old Boys Association neither represents the school nor the monastery nor the Benedictine Order as stated above but provides a network amongst Old Boys and Old Girls. The report names a small number of monks known to many; monks who clearly committed atrocious acts on vulnerable children. However, it should also be noted that hundreds of pupils enjoyed their experiences at the school, some of whom went on onto successful c

areers as a result of their education at Carlekemp and/or Fort Augustus. There were also dozens of monks across the decades who provided good pastoral and spiritual care and their names will be remembered as such by many pupils.