The Benedictines at Fort Augustus

By Dom Columba Edmonds OSB in the Glasgow Observer 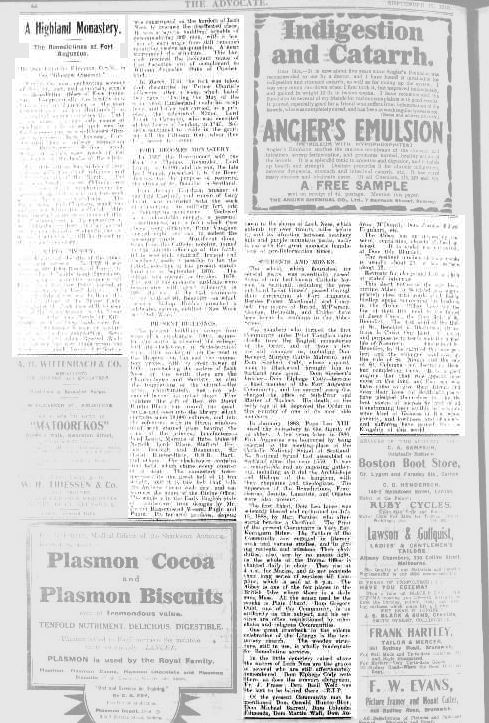 THE BENEDICTINES AT FORT AUGUSTUS

Amidst, the, most enchanting scenery of the glen,  loch, and mountain, stands the Benedictine Abbey of Fort Augustus. Geographically. the locality now known is Fort Augustus, is the most centred point. of the Highlands” as an ancient writer expresses it. Until a few years ago, the only means of reaching this favoured spot was by the steamers run by a well-known Glasgow company. Now, however, Fort Augustus has a railway connection from Queen-street Station, which brings it within easy reach of the great city on the banks of the Clyde.

This little village has historical associations with the chief religious and military events of the North. The spot was familiar to St. Columba and twelve Celtic monk-missionaries who took up and carried on the work of Apostle of Caledonia. The Gaelic name. Cille-Chumein, which the village has borne for well-nigh thirteen hundred years, is evidence of this. St. Cummein one of the successors of St. Columba at Iona, having visited our district, founded a church, the remains of which may still be traced in the present cemetery.

The historv of the site of the abbey is of great interest. In 1232 it was given by Sir John Bisset, of Lovat, to the monks of Beauly (near Inverness) and remained monastic property till when the last Prior handed it over to the sixth Lord Lovat. At an early date a fort was built on this extreme outpost, of the Fraser lands, a fragment of which may still be seen behind the hotel known as the Lovat Arms. After the Battle of Killicrankie. in 1715, these lands were forfeited by Alexander Fraser, on account of his part in the insurrection. Some ten years later, when General Wade was constructing new roads across the country, a much larger fortification was constructed on the borders of Loch Ness, to overawe the dissaffected clans. It was a square building, capable of accommodating 300 men, with a bastion at each angle (ono still remains) mounting twelve six-pounders. A moat surrounded the structure. This barrack received the inelegant name of Fort Augustus, out of compliment to William Augustus, Duke of Cumberland.

In March, 1746, the fort was taken and dismantled by Prince  Charlie’s followers, after- a siege which lasted two days. During the May of the same year, Cumberland made his camp here, and hither was carried, as a prisoner, the celebrated Simon, Lord Lovat (a Catholic), who was executed at the Tower of London, in 1747. Soldiers continued to reside in the garrison till the Crimean War, when they left, never to return.

In 1857 the Government sold the Fort to Thomas Alexander, Lord Lovat, for £5000, and his son, the late Lord Simon, presented it to the Benedictines tor the purpose of restoring the Order of St. Benedict in Scotland.

Dom Jerome Vaughan, brother of the late Cardinal, and cousin of Lady Lovat, was entrusted with, the work of converting this military fort into a Benedictine monastery. Endowed with indomitable energy, a personal attractiveness, and a faith which rises above every difficulty, Prior Vaughan worked night and day to collect the necessary funds. Munificent donations from the Catholic nobility, joined to the humble offerings of the faithful in Scotland, England, Ireland and elsewhere, made it, possible to lay the foundation-stone of the present stately buildings in September, 1876. The college was opened in October, 1878. The rest of the monastic buildings were inaugurated with great solemnity in 1880—the year of the 14th centenary of the birth of St. Benedict—on which occasion Bishop Hedley preached a celebrated sermon, entitled “New Work and Old Ways.”

The present buildings occupy four sides or a quadrangle 100ft. square. On the north is situated the college, with its clock-tower, in Scots-baronial style, 110ft. in height; on the west is the Hospice; on the east, the monastery proper, with its great tower of 140ft., overlooking the waters of Loch Ness; on the south there are the Chapter-house and Sacristy, as also the foundations of the church – the latter, unfortunately, has not advanced beyond its initial stage. Fine cloisters (the gift of Rev. Sir David Hunter-Blair) run round the quadrangle and open into the library, which contains some 18,000 volumes, and into the refectory, with its fifteen windows filled with stained glass bearing the arms of the principal benefactors – Lord Lovat, Marquis of Bute, Duke of Norfolk, Lords Ripon, Stafford, Herries, Denbigh and Beaumont, Sir David Hunter-Blair, O.S.B., Bart., and others. The clock-tower contains nine bells, which chime every quarter of an hour. The monastery, tower possesses its one great bell of 1½ ton weight, and it is this bell that tolls the Angelus thrice each day, and announces the hours of the Divine Office. The whole is in the Early English-style of architecture, from designs by Mr. Joseph Hansom and Messrs. Pugin and Pugin. Its terraced gardens, sloping down to the shores of Loch Ness, which extends for over twenty miles before it, and its situation between heathery hills and purple mountain peaks, make it vie with the great monastic foundations of pre-Reformation times.

The school, which flourished for several years, was eventually closed. Some of our best-known Catholic laymen in Scotland, including the present Lord Lovat himself, passed through their curriculum at Fort Augustus. besides Fraser, Macdonald, and Campbell, the names of Brand, McPherson, George, Reynolds, and Calder have been borne by students in the Abbey School.

The members who formed the first Community under Prior Vaughan came chiefly from the English monasteries of the Order, and of these a few are still amongst us, including Dom Bernard Murphy (Little Malvern), and Dom Sigebert Cody, whose appointment to Blackwood brought him to Scotland once again. Dom Sigebert’s brother – Dom Elphege Cody – became a fixed member of the Fort Augustus Community, and for several years discharged the office of Sub-Prior and Master of Novices. His death, at the early age of 44, deprived the Order in this country of one of its most able members.

In January, 1883, Pope Leo XIII raised the monastery to the dignity of an abbey. A few years later, in 1886, Fort Augustus was honoured by being selected as the meeting place of the Catholic National Synod of Scotland. No National Synod had assembled in Scotland since the year 1559. It. was so remarkable and an imposing gathering, including as it did the Archbishops and Bishops of the kingdom,  with their chaplains and theologians. The Superiors of the Benedictines, Franciscans Jesuits, Lazarists, arid Oblates were also present.

The first Abbot, Dom Leo Linse, was solemnly blessed and enthroned on July 15, 1888, by Mgr. Persico, who afterwards became a Cardinal. The Prior of the present Community is Very Rev, Kentigern Milne. The Fathers of the Community are engaged, in literary work and various studies, and in giving retreats and missions. Their choir duties, also are by no means light, as the whole of the Divine Office is chanted daily in choir. They rise at 4 a.m. for Matins, and do not conclude their long series of services till Compline, which is said at 8 p.m. The Abbey is one of the few places in the British Isles where there is a daily sung Mass. All the music used by the monks is Plain Chant. Dom Gregory Ould, one of the Community, is an authority on this subject, and his services are often requisitioned by other choirs and religious Communities.

One great drawback in the solemn celebration of the Liturgy is the temporary church. The wooden structure, still in use, is wholly inadequate for Benedictine services.

In the little cemetery raised above the waters of Loch Ness are the graves of several who are still affectionately remembered. Dom Elphege Cody rests there, so does the convert clergyman Fr. J. Fraser: Dom Basil Weld was the last to be buried there: – R.I.P.

The Abbey has an interesting museum, containing objects of local interest. It is under the curatorship of Dom Odo Blundell.

The resident number of choir monks is usually about 20. of lay brothers about 12.

Retreats for clergy and laity are held at stated intervals.

This short notice of the only Benedictine Abbey in Scotland may appropriately close with words which Bishop Hedley spoke concerning his brethren in the Order:- “They have for the law of their life, next to the Gospel of Jesus Christ, the Holv Rule of St Benedict. The first word of the Rule of St. Benedict is Obedience; its refrain is Christ Our Lord. Its object and purpose is to teach men the hidden life of Nazareth… The rule of St. Benedict, by the right of the more perfect and the stronger, swallowed up the rule of St. Ninian and the rule of St. Columba – not destroying them, but completing them. It is a good augury that that rule appears once more in this land, and that men who have come to give their labour, and even their lives, for Scotland’s peace have pledged themselves to take the best means of success by first of all transforming their earthly natures into some kind of likeness of Him whose poverty, and lowliness, and obedience, and suffering hate gained Him the Kingship of this. world.